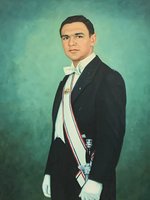 J.G. Joseph Amore, a longtime resident of Collegeville, PA, passed away peacefully on Tuesday, March 9, 2021 at the Reading Hospital in Reading, PA.  He was 87 years old.

Mr. Amore was born in Bridgeport, PA during the Depression on January 30, 1934, the son of the late Gaspare and Rosina (Venezia) Amore.

He was a devout Catholic and parishioner of St. Eleanor RC Church.  He was a Fourth Degree Knight of Columbus and member of the Perkiomen Valley Council #3633.

"Jay" as he was known to his friends was a 1955 graduate of Norristown High School and was the Southeastern District Representative of the Pennsylvania Youth Legislature, where he helped pass legislation about signed absentee votes and removing the door from refrigerators and ovens before disposal.

He was a graduate of the Modernella College of Beauty Culture.

Mr. Amore served in the U.S. Army in 1956 as a Specialist in Command Headquarters, where he worked as a Clerk Typist. He was the President of the Mr. Plange Advisory Council on the Post of the Second Army Air Defense Command of George G. Meade.

He was a 1960 graduate of Temple University where he studied business.

He lived in Reno, Nevada for a while where he was a talented hairdresser and worked for top hair salons and celebrities. He then moved to Atlantic City, NJ, where he owned his own beauty salon.

Mr. Amore was also a restaurant owner named after his mother, "Mamma Rosina's", who he loved very much. He also worked as a chef in several of the casinos in Atlantic City.

He was a member of the Historical Commission in the Township of Hamilton, NJ and involved with many parts of the community including retirement homes where he would cut and style hair for the elderly.

He also served on the Committee Assignment at the BPOE of Reno #597 of the Elks.

Mr. Amore enjoyed oil painting and learned how to raise orchids.  He also enjoyed skiing, playing golf, and singing as a tenor in the Church choir.

Along with his parents, Mr. Amore was preceded in death by his sister, Anna Baccaro.

Relatives and friends are invited to the viewing on Tuesday morning from 10:30 AM to 11:15 AM at the church.

The Amore family would appreciate memorials made in the form of Mass Cards.