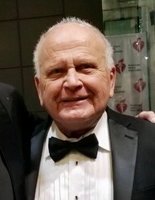 He was born in Conshohocken, PA on December 31, 1935, the son of the late Frank Stanley and the late Mary (Kosek) Maziarz. He graduated from Saint Matthews High School, Conshohocken, PA. He worked at SPX Corporation for over 20 years, then moved to Suburban General Hospital, from where he retired.  After retirement, he worked at the Montgomery County Intermediate Unit, as an aid for children with special needs for several years.

He was a member of St. Titus RC Church of East Norriton, Pa. Frank was an avid gardener, and was very proud of his flowers and shrubs.  He was very fond of red carnations and gardenia. He was fond of animals, particularly dachshunds, and his favorite cat, a rescue, who adored him.

Burial will be private, for immediate family only.