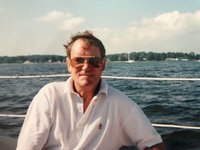 Born in Philadelphia he was the son of the late Jeannette ( Crevey ) and Robert M. Hudson of Ardmore.

He is survived by his wife Margaret ( Pfaff ) Hudson of Paoli and one son and daughter-in-law, Jeffrey and Natalie Hudson of West Columbia, SC. He has one sister Jeannette J. Hudson of Malvern and one brother-in-law, Dr. Charles L. Pfaff of Placitis, NM. He was pre-deceased in death by his sister, Judith H. Huffacker, in January of this year. He was pre-deceased in death by his son Brian D. Hudson and Courtney E. Hudson. He has two step-children John C. Myers of Pottstown and Stephanie M. Helgeson of Wayne, PA and four step-grandchildren.

He grew up in Ardmore and attended Waldron Academy and The Malvern Preparatory School and graduated in 1962 from Haverford High School. He attended York College before enlisting in the United States Navy in 1964.

Robert spent his active work years in the automobile business both wholesale and retail. He began his career at Merion Motors in Ardmore, his father’s dealership.

There are no plans for a funeral service or interment at this time.