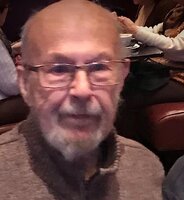 He was born in Niagara Falls, New York on June 17, 1937, the son of the late John C. and the late Adelaide (Fermoile) Brown.

John has been living in the Norristown area since 1975, formerly of Niagara Falls, NY.

He served in the US Army.

John was an IT Specialists and taught computer science at Montgomery County Community College.

He was the husband of Late - Beatrice J. (Zaso) Brown.

Interment will be private in Gates of Heaven Cemetery, Niagara Falls, NY.