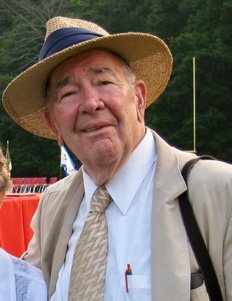 Buck was the son of Carroll E. and Florence Holland Shelton.  Buck’s father was a newsman too as well as a public relations director in the Philadelphia political scene.  Buck was predeceased by his wife Patricia Stillmun Shelton of 62 years.

Born in Philadelphia on January 29, 1928, Buck graduated from Cheltenham High School, Elkins Park, PA in 1945.  Thereafter, he served in the U.S. Army from April 1946 until May 1947 during which time he was commissioned in Seoul Korea becoming editor of the 7,000 circulation Korea Graphic, a tabloid printed in Seoul and distributed weekly to the liberation troops.

Buck began his career in 1945 as a copy boy at The Evening Bulletin, the largest evening newspaper in America in the 1950s.  His favorite beat was taking stats at sports events.  Over the years you would never find Buck at a Phillies game without pen and paper copiously working on the box scores.

Following a break for Army service, he took advantage of the G.I. Bill to attend LaSalle College, Philadelphia, PA, earning a B.A. in pre-law in 1952.  During the last two years of college, he worked nights at The Bulletin where he remained for 35 years, completing his time there as a news editor.  When the newspaper stopped publication on his birthday January 29, 1992, Buck moved to The Times-Herald Norristown where he was editor for ten more years until he retired.

Funeral arrangements are handled by Moore, Snear & Ruggiero, (610) 828-0330.  In lieu of flowers, please donate to Bread for the World, www.bread.org.

Share Your Memory of
Carroll
Upload Your Memory View All Memories
Be the first to upload a memory!