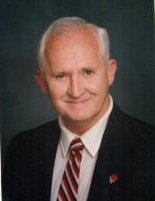 He was a Foreman of the former American Inks & Coating, where he was employed for 43 years retiring on January 1, 1991.

He was born in Conshohocken and raised in Norristown, PA and has resided in King of Prussia since 1955.

He was a graduate of West Catholic High School, class of 1948.

He was the loving husband of Theresa (Mainieri) Kelly.

He was a member of Sacred Heart Parish Church, the former St. Augustine's Catholic Church where he served as an Usher for many years, Ancient Order of Hibernians, Notre Dame, Division 1, Montgomery County, Norristown Fire Company.  He was a 20-year volunteer with the former Montgomery Hospital and Einstein Medical Center Montgomery.

He was preceded in death by his daughter Karen Ann Kelly-Johnson; his brothers Paul L. Kelly, Jr. & Richard F. Kelly.

In lieu of flowers, the family would appreciate donations be made to: Sacred Heart Parish Church, 120 Jefferson Street, Bridgeport, Pa 19405.

Share Your Memory of
Gerald
Upload Your Memory View All Memories
Be the first to upload a memory!
Share A Memory